Rutgers head men’s basketball coach Steve Pikiell announced today that Mike Larkin has joined the staff as Special Assistant to the Head Coach and Ben Asher has been elevated to Director of Basketball Operations and Recruiting. Larkin arrives after serving as associate head coach at Saint Michael’s College, while Asher has worked under Pikiell for the past three seasons.

“Mike and Ben are both very talented and dedicated individuals who make Rutgers Basketball better,” said Pikiell. “Ben has worked tirelessly on the behalf of our student-athletes and is integral to both our internal and external efforts. Mike brings a track record of meeting challenges and achieving success at the Division II and III levels. Most important, both are character people committed to a winning culture.”

A native of Patchogue (N.Y.), Larkin spent seven seasons as an assistant at Saint Michael’s, including the past four as associate head coach. During his tenure he helped guide the Purple Knights to 18 wins in back-to-back seasons and was instrumental in the recruitment of two Northeast-10 Conference All-Rookie honorees. Prior to his arrival in Colchester (Vt.), Larkin served as a graduate intern for two seasons at Rutgers-Newark and was an assistant coach at Bard (N.Y.) College.

In his new role, Larkin will assist in a range of duties related to the coordination and administration of the program, while providing executive level support to Pikiell. He will be responsible for film breakdown and analysis, opponent scouting, facility management, practice planning, and ticketing.

Larkin was a Jacob Albright Scholar at Albright College, where he helped the Lions to 17-9 records as a junior and senior before earning a bachelor of arts in Spanish and a bachelor of science in math in 2009. He completed his master’s degree in public administration at Rutgers-Newark in 2012.

An Oyster Bay (N.Y.) native, Asher serves as liaison to the athletic department at large, including the areas of communications, RVision, marketing, creative, business operations and facilities management. He is integral in the program’s social media outreach and recruiting initiatives. The Scarlet Knights welcomed a four-recruit signing class in 2018 that included multiple four-star players for the first time at Rutgers since 2008. Asher is also instrumental in supervising the program’s student managers, scheduling and facilitating team travel, and the development and execution of team camps.

A 2013 graduate of West Virginia, where he was head manager under coach Bob Huggins, Asher arrived in Piscataway after serving as Director of Operations at Siena. He also spent two seasons (2013-15) in the ACC as a graduate assistant at N.C. State. The Wolfpack advanced to the Sweet 16 in 2015, after reaching the ACC quarterfinal and advancing to the second round of the NCAA Tournament in 2014. 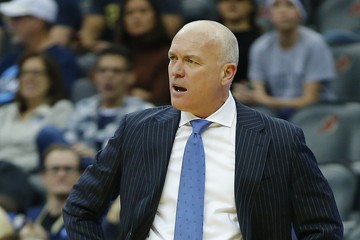