Augustana scored the first four points of overtime Saturday and held on for a 65-63 win over Carroll in the Vikings’ CCIW opener at Carver Center. The victory was the 500th in the collegiate coaching career of Grey Giovanine and moved Augustana to 5-2 overall and 1-0 in the league.

Giovanine is currently in his 21st year at the helm of Augustana men’s basketball. He is the school’s all-time winningest coach, he has earned national Coach of the Year honors from Basketball Times in 2015 and 2019 and D3hoops.com in 2017 and led Augustana to national championship game appearances in 2015 and 2017. Entering this season, he had compiled a record of 415-142 (.745) in his first 20 seasons with the Vikings.

Over the last five seasons, the Vikings have gone 131-26, gotten at least as far as the sweet sixteen each year and become the first program ever to be ranked in D3hoops.com’s final top five for five consecutive years. Giovanine’s 2018-19 squad went 26-4 and captured an unprecedented fifth straight CCIW championship. His 2017-18 outfit finished 25-6 and reached the Division III quarterfinals. In 2016-17, Augustana finished 24-9 and fell by one point in the national title game. His 2015-16 team posted a 29-2 record—equaling the most wins in school and conference history—and advanced to the quarterfinals of the Division III Tournament. His 2014-15 squad’s 27-5 season included a trip to the national championship game. The Vikings’ 17 NCAA Tournament wins over the last five seasons are the most by any program at any level of NCAA competition.

In CCIW play, Giovanine’s teams have gone 202-84 (.706). His ten regular season titles are the second-most in conference history and he’s currently third all-time in wins and winning percentage (minimum of two seasons). His six conference tournament championships are the most in league history. 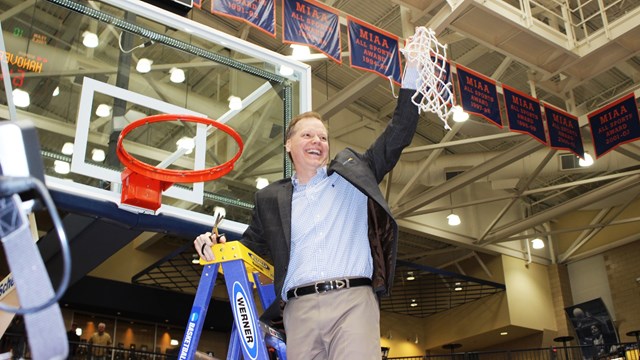