With an NCCAA national title and two conference coach of the year awards to his name, Bill Carr has been hired as Santa Clara women’s head basketball coach.

Carr, a native of Los Angeles, has been a men’s basketball coach for more than 25 years, including extensive experience in the West Coast Conference. He has compiled a record of 202-132 (.601) at Point Loma Nazarene, UC San Diego, and Spring Hill College in 11 years as a head coach. He has made Division I stops as associate head coach at San Diego and Long Beach State, and as an assistant at San Francisco.

“We are thrilled to hire a coach of his caliber,” director of athletics Renee Baumgartner said. “Bill has been a successful coach at all levels of basketball and has a demonstrated ability to get the most out of his players both on and off the floor.”

He has spent the last five seasons as the leader of Point Loma Nazarene. Under Carr the Sea Lions made the move from NAIA to Division II in 2012. Despite these challenges the PLNU men’s basketball program thrived in the five seasons under Carr, posting a 81-63 (.563) record.

The Sea Lions won 20 or more games with Carr at the helm in three of his five seasons, and made the playoffs three times.

“I’m obviously excited to be a Bronco,” Carr said. “I can’t wait to be a part of Renee’s vision for Santa Clara athletics. Her energy and passion are tremendous. We want to build on what Coach [JR] Payne and the team did last year. Our goal is to take the program to new heights.”

Last season, Carr, 50, led PLNU to a 13-14 record and coached the PacWest Freshman of the Year in Josh Rodriguez.

In 2014-15, Carr guided the Sea Lions to a record of 21-8 and a No. 5 seed in the PacWest Championship after posting a 13-7 record in league play. PLNU opened the season with five straight wins to climb to No. 22 in the National Association of Basketball Coaches poll, marking the first time any Sea Lion team had ever been ranked at the NCAA Division II level.

“While this will be Bill’s first time coaching on the women’s side, I have been fortunate to know him for more than 10 years and tracked his accomplishments,” Baumgartner said. “He is a great teacher of the game and proven winner who values the balance between academics, athletics and the student-athlete experience.”

Carr’s teams at Point Loma recorded a number of benchmarks.

In 2014-15 Hayden Lescault was a first team All-PacWest selection, the first such honor in the history of the men’s basketball program, while Marek Klassen earned third team accolades. The Sea Lions also finished the year ranked No. 5 nationally in 3-point field goal percentage (41.9). Sam Okhotin led the way by finishing sixth in the nation with a .475 shooting percentage from behind the arc.

In 2013-14, Carr led Point Loma to the National Christian College Athletic Association (NCCAA) West Region title and National Championship. The Sea Lions entered the tournament as the No. 4 seed before winning all three games in Winona Lake, Indiana, to capture the fourth NCCAA men’s basketball championship in the history of the school.

In 2011-12, Carr was named GSAC Co-Coach of the Year while two of his players, Rhett Beal and Greg Murray, earned all-conference honors. Beal was later named as an honorable mention All-American. The Sea Lions qualified for the NAIA National Championships and notched a 74-44 opening-round win over Texas Wesleyan before falling to top-ranked Shorter.

Prior to his stint at PLNU, he was at the University of San Diego for four years (2007-11) as associate head coach for the Toreros.

During Carr’s tenure the Toreros won the 2008 WCC Tournament title and advanced to the second round of the NCAA Tournament that season. USD beat the University of Connecticut in the first round for the program’s first-ever NCAA Tournament victory.

Prior to USD, Carr was at UC San Diego for three years (2004-07) as head coach. In his second season at the helm, Carr led UCSD to a 15-14 record, marking the school’s first winning season since moving to the NCAA Division II level in 2000.

Carr’s resume also includes two seasons as the associate head coach at Long Beach State (2002-04), and three years (1999-2002) as the head coach at Spring Hill College in Mobile, Alabama. He accumulated a career mark of 84-23 (.785) at Spring Hill and led the Badgers to two appearances in the NAIA National Tournament, including three “final eight” trips.

In his first season Carr led Spring Hill to a 29-8 mark and a Gulf Coast Athletic Conference (GCAC) championship. Carr was named the 1999-2000 GCAC Coach of the Year that season and was a finalist for the NAIA National Coach of the Year.

As a player, Carr competed for two seasons (1985-87) at the University of San Francisco under coach Jim Brovelli. His first campaign at USF was the “Back to Basketball” group that marked the restart of the program after a three-year hiatus.

Carr earned a degree in accounting at USF and later began his coaching career there, spending nine years as an assistant for Brovelli (1990-95) and Phil Mathews (1995-99). He helped recruit and mentor 10 first team All-WCC performers, including the 1998 and 2000 WCC Freshmen of the Year. USF advanced to the NCAA Tournament in 1998 after winning the West Coast Conference Tournament championship. 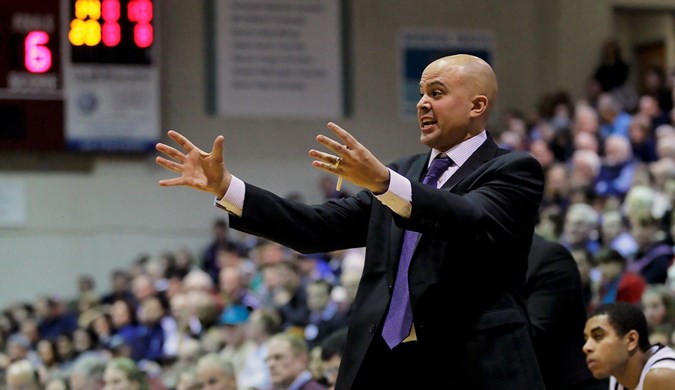