Smith has accepted an assistant coach position with Sam Houston State University in Huntsville, Texas and will join the Bearkat staff in July. Sam Houston State is a member of the NCAA Division I and the Southland Conference.

“I am very proud of what we have been able to accomplish in our two years at Texas Lutheran,” said Smith. “The majority of the praise for our success needs to go to the kids we have had in the program. These guys bought into our program and into what we were doing. Both seasons were different – different ways to win championships. We did it because we had great people, great support and a great coaching staff.”

“I am definitely thankful for the opportunity given to me at Texas Lutheran. I am leaving the program in a good place and am really excited to see what this program will do in the coming years. I think it has just scratched the surface of where it can be.”

In his two short years at TLU, Smith took a Bulldog men’s basketball program that finished last in the Southern Collegiate Athletic Conference in the year prior to his arrival and led the team to consecutive SCAC regular-season titles and consecutive conference tournament championships.

Smith was named the NABC Division III South Region Co-Coach of the Year for 2015-16.

Smith was named the SCAC Coach of the Year in each of his two seasons with the Bulldogs. He twice coached the SCAC Tournament Most Valuable Player (Jordan Kouremetis in 2015 and Sterling Holmes in 2016).

In addition to the honors collected by Holmes and Kouremetis, Smith coached Donte McGee to the 2014-15 SCAC Defensive Player of the Year award and Paris Marquez to the 2015-16 SCAC Newcomer of the Year honor.

The Bulldogs finished the 2015-16 year with a 3.01 team grade point average and qualified for the National Association of Basketball Coaches’ Team Academic Excellence Award. Student-athletes Joseph Richardson, Josh Alderman and Jordan Kouremetis qualified for the NABC Honors Court, given to junior or senior players with a 3.2 or higher cumulative GPA.

The 2015-16 Bulldogs received the TLU Athletics Team Community Service Award for their work in the Seguin community, particularly for their volunteer hours at Patlan Elementary School of the Seguin Independent School District.

“Coach Smith did a fantastic job in his short time here, and we are grateful to him for leading our men’s basketball program to new levels of success,” said Bill Miller, TLU’s Director of Athletics.  “We are sorry to lose him, but we know this is a good professional opportunity for him. We wish him all the best at Sam Houston State.”

“We are grateful to Coach Smith for elevating TLU’s basketball program to the top level in NCAA Division III, and we are committed to replacing him with a head coach who will continue and advance the program to even greater success.”

Smith arrived at TLU after spending the 2012-13 and 2013-14 seasons at the helm of the Schreiner University men’s basketball program. Before coming to Schreiner, Smith spent three years as an assistant coach at his alma mater, University of Mary Hardin-Baylor. During his three years as an assistant coach, the Cru racked up a 70-18 record and qualified for three NCAA Division III Championship tournaments. 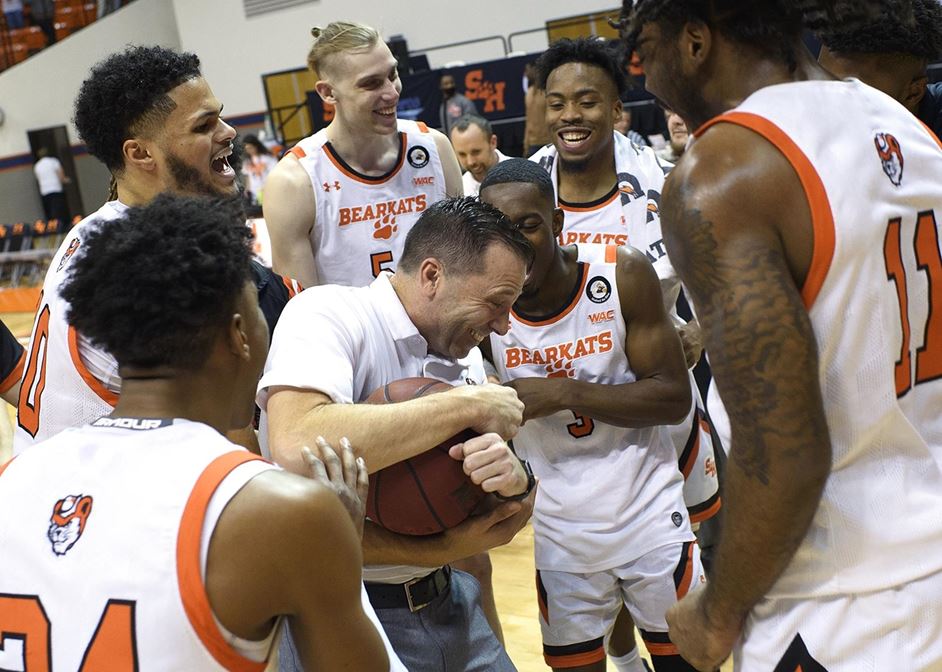