Justin Hutson has been named as the head coach at Fresno State. The San Diego State associate head coach will replace Rodney Terry who departed for a similar position UTEP earlier this spring.

Hutson juist wrapped up his second stint at San Diego State (2006-11, 2013-2018), and served as the associate head coach at UNLV between his stays with the Aztecs. The Bakersfield, CA native has also worked as an assistant at Cal Poly.

The introductory press conference can be watched HERE at 6:00pm. 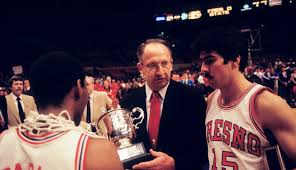