Congratulations to the following coaches who have been selected as the Week 2 HoopDirt.com Coach of the Week presented by The Hoop Group. The coaches are now eligible to receive the HoopDirt.com National Coach of the Year Award presented by the Hoop Group which will be announced at the conclusion of the 2016-17 college basketball season. All previous weekly winners can be found below.

Nominations for next week’s award can be emailed to: [email protected] – please include a brief statement as to why the coach should be recognized as well as any other information that may be helpful.

Holtman’s Bulldogs had a banner week at the Las Vegas Invitational, with back to back Power-5 victories. Thanksgiving night saw Butler take down Vanderbilt by ten, before Friday’s showdown with a Top-10 Arizona squad. Butler was impressive offensively shooting 47% from the field and 40% from three to take down the Wildcats 69-65 in the championship game. For their efforts Butler jumped from not being ranked to 18th in the AP Poll and will look to continue that hot streak Monday night on the road against Utah.

Northwest Missouri State has had back to back impressive weeks, with a win over top-25 Augustana University and a road win at Metro State two weeks ago, followed by back to back home wins this week. The day before Thanksgiving McCollum’s squad took down Lake Superior in a nail-biter before a blowout win three nights later against Concordia. Northwestern Missouri will presumably hold still with their 3rd overall ranking and will play twice this week including a road game against Central Oklahoma.

Rose’s Illinois Wesleyan squad has been making waves early in the season. Off to a 5-0 start they upset 8th ranked Ohio Wesleyan on Saturday, winning decisively in the 88-70 effort. The Titans used a 14-2 run early and never looked back. The Titans were unranked entering last week but with the impressive victory will look to finally earn a ranking this week with a home league game against North Central College.

Burton’s 11th ranked Bulldogs are built on lofty expectations for their team last week. On Sunday they defeated Rio Grande in blowout fashion at the NAIA Showcase event. Prior to that they picked up a win over 13th ranked Robert Morris, 88-79. Standing at 8-3 overall, they’ll look to keep rolling this week with two tough road games this week.

McCann’s Palm Beach State squad had one of the most impressive weeks in the country, with two top-15 wins. First, Palm Beach took down 12th ranked Daytona State in a mesmerizing one point affair Tuesday night. That in itself that would be a good week but McCann’s boys followed that up with a decisive 13 point victory over 3rd ranked Trinity Valley CC 97-84 on Sunday.

Tagged with: Coach of the Week

HoopDirt.com and Just Play Solutions once again partner on Coach of the Week program 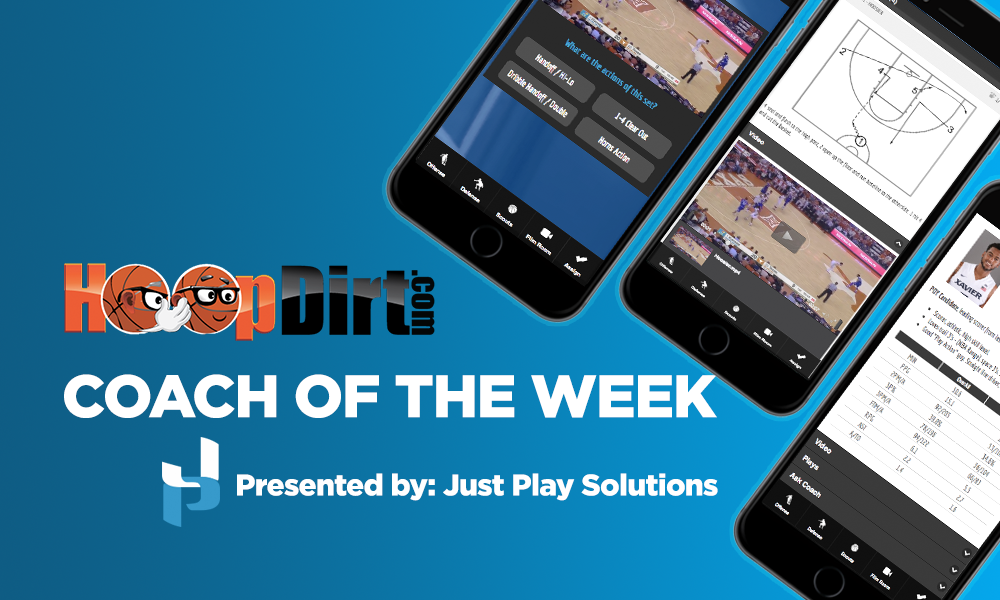